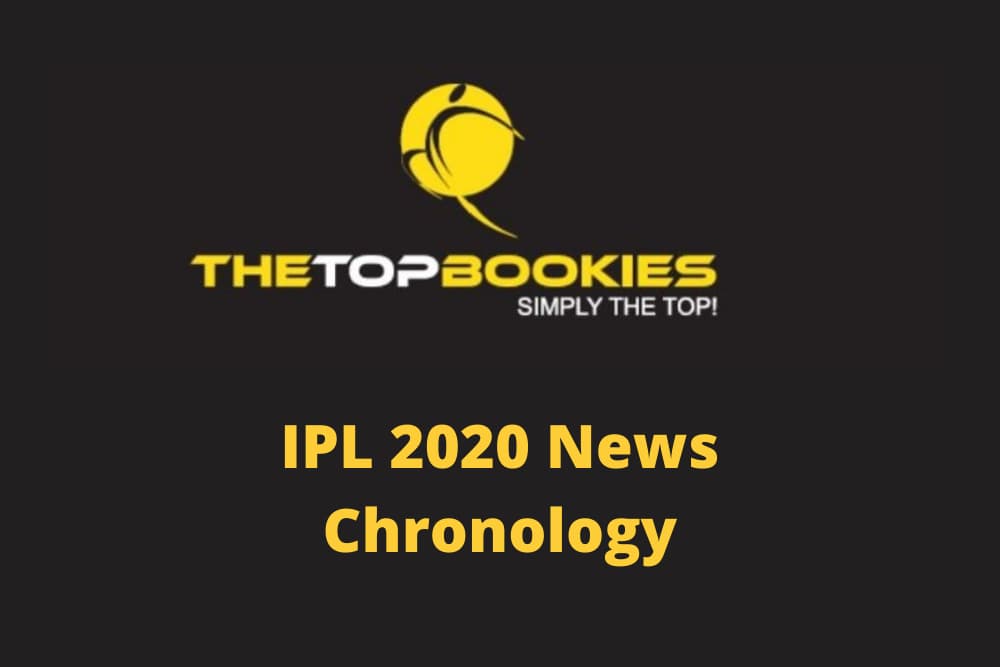 The IPL in the year 2020 is the 13th season of this league, which was originally scheduled to commence on 29th March 2020 with the opening match between last year champion Mumbai Indians and Chennai Super Kings the runner-up team of last year. However, the Covid-19 pandemic has affected this marquee tournament time other sporting events across the world. The latest updates are with a positive vibe that gives hope to the IPL 2020 betting sites that the league will be played this year.

Let us take a look at the timeline of the events and the latest IPL 2020 news.

On the 3 of August after the meeting with the Indian Government, the BCCI officially announced the IPL 2020 edition will be played in UAE. The tournament should start on 18th September and the final will take place on 10th November.

ICC has, much to the relief of the IPL planning body, confirmed that the T20 World Cup has been postponed due to the ongoing COVID-19 pandemic. This is good news for IPL fans since the September-November timeframe has been cleared for IPL to go ahead.

On 17th July, the BCCI announced that they are considering hosting the tournament in UAE between 26 September and 7 November. October-November is the only window to fit the IPL into this year considering the Australia tour set to begin in the first week of December. The BCCI's Apex Council discussed the possibility of the IPL being played in the UAE in its entirety.

However, the tournament in UAE will only be possible if the scheduled ICC T20 World Cup gets postponed and the Indian government provides the approval. BCCI also discussed the training camp venue in India and Ahmadabad is likely to be a venue for holding a training camp. BCCI is also looking at a shortened window of 5 to 6 weeks for IPL 2020 between September and early November, provided the T20 World Cup is postponed which was scheduled during that time frame.

While BCCI was grappling with about hosting the IPL and the timeframes, they seemed annoyed by ICC’s delay in sharing the final word on the fate of the T20 World Cup. BCCI official said that the BCCI will go ahead with irrespective of any further updates from ICC.

After Sri Lanka and UAE, New Zealand also offered to host the IPL 2020 in case the big cash league can’t happen in India. BCCI official made a statement that staging an event in India has to be the first choice but in case it is not safe to have it due to ongoing pandemic, then we will look at the overseas options. New Zealand reportedly had very few Covid-19 cases around then.

The general secretary of Emirates Cricket, Mubashshir Usmani, confirmed that the Emirates cricket board has offered to host the IPL 2020 in the UAE. In the offer, he expressed the confidence in UAE’s cricketing infrastructure to host the IPL. UAE has the proven record of hosting neutral tournaments on the past, he added.

On 24 May, Indian sports Minister Kiren Rijiju stated that the decision on whether or not to allow the tournament to be conducted in 2020 will be made by the Indian government based on the situation of the pandemic.

When it was clear that the pandemic won’t allow IPL to happen in India any time soon, the Sri Lanka Cricket president Shammi Silva had written to the BCCI offering to host IPL 2020 following its indefinite suspension due to COVID-19.  He also stated that there’s a precedent for this because they’ve played the IPL out of India in South Africa in the past.

On 14th April, India’s Prime Minister Narendra Modi announced that India will remain lockdown till May 3 to contain Covid-19 cases. Following a day on 15th April, the BCCI functionary confirmed that IPL 2020 has been postponed indefinitely due to the ongoing coronavirus pandemic. BCCI functionary said, "We have to fight the pandemic and there is no choice for now. These are extraordinary times. We can't talk about cricket and IPL at the moment so it has been indefinitely postponed and franchises have been informed about it". BCCI president Sourav Ganguly had hinted earlier that the chances of the 2020 season of the league starting any time soon was bleak.

On 9th April, with India under a nationwide lockdown, a BCCI official made a statement that the Board was considering hosting the tournament in July or during the winter, possibly behind the closed doors with all the safety precautions in place.

Board of Control for Cricket in India (BCCI) released an official statement stating that the IPL 2020 is suspended till 15th April 2020 given the ongoing Corona Virus pandemic. This decision was taken as a precautionary measure against the ongoing Novel Corona Virus (COVID-19) situation. This decision was taken after a meeting with the owner of all eight-team franchise.  The Central government had also suspended all visas to India till April 15 as part of measures to contain the spread of the pandemic which would have affected the foreign players if the IPL was to go on as scheduled.

Chief Minister of Maharashtra state, Uddhav Thackeray said that his government would allow IPL games without crowds in Mumbai stadium. The Ministry of External Affairs (MEA) also said it is up to the IPL governing council to decide whether it wants to hold the T20 league this year.

Kiren Rijiju, India’s Union Sports Minister, also tweeted that "there are no restrictions on playing but guidelines to be followed strictly in the larger interest of health." Later, he also said that it is important for the sporting bodies including the BCCI and IOA  to follow the guidelines issued by the health ministry. The IPL was being contemplated behind closed doors.

Besides, the IPL also told franchises that it was increasing the hosting fee per home match, payable to the respective state association, from INR 30 lakhs per match to INR 50 lakhs. The IPL committee said, that the hike in hosting fee was necessary to the state associations for the maintenance of the ground, stadium, and other facilities.

As of 5th March, India’s coronavirus patient count was only 31, including 16 Italian tourists. Internationally, the outbreak had killed more than 3,300 people and infected nearly 100,000 across the globe.

However, on the 5th March, even as COVID-19 affected all walks of life across the world, BCCI president Sourav Ganguly said the IPL is "on" and that the board is taking all necessary precautions for the smooth conduct of the tournament. All medical issues will be addressed by the medical team, every tournament will go on, he further added.

On 3rd March, the IPL Governing Council chairman Brijesh Patel ruled out any threat to the IPL due to the novel coronavirus outbreak, saying that the authorities were monitoring the situation. “There is no threat as of now and we are keeping a tab (on the situation)," said Brijesh Patel when asked about coronavirus threat to IPL. No possibility of the delay was envisaged by this time and the IPL was supposed to go ahead as planned.

On 18th February, the BCCI released the fixture details of IPL 2020. The league stage was scheduled to start on 29 March 2020, with the opening match between last year's finalist Mumbai Indians and Chennai Super Kings, at Wankhede Stadium in Mumbai.