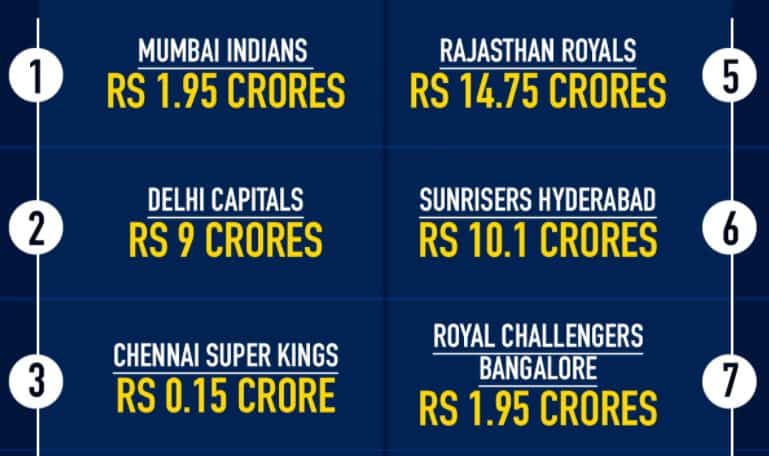 The most awaited cricket related event is back with a bang. The Board of Cricket Control India has decided to conduct the IPL auctions on 18th February 2021. The host city of Chennai has already started smelling the money. Due to the pandemic and late finish of the IPL 2020, the BCCI cancelled the mega auction this season. All the teams were on the same page as they had a little time left to rebuild the entire team, strategies, and brand activations. This year BCCI allowed any capped and uncapped Indian players to register themselves for the auction. They even allowed U-19 players to register only if they have played in either first-class or a list-A game for any state association with which they have been part. The auction will have a direct effect on the upcoming IPL winning predictions.

With all the rules and regulations, a total of 1097 players registered themselves for the auction. The list includes 21 capped Indian players with 186 capped international players. On the other hand, 83 uncapped players will be trying their luck this year. 27 Associate players (8 Nepal, 9 UAE, 2 USA, 7 Scotland & 1 from the Netherlands) have also been included in this year’s auction.

So what will be expected on 18th February from 3 pm onwards, when the fan and franchisees’ favourite Richard Madley aka The Hammerman’ will commence the auction? Let's find out which team has how much money in their purse and how many slots in their squad.

After finishing 6th last season, Kings XI Punjab released 9 of their players including Glenn Maxwell, Sheldon Cottrell, and Jimmy Neesham. This helped them generate a fund of INR 53.2 cr to be available for this auction. So Punjab can go for 9 players to finish the 25 players quota with 5 international players. They already have a great top and middle order. Captain KL Rahul and Owner Preity Zinta will be looking for someone to strengthen their bowling order to help Mohammad Shami. With such a purse, they might go for Big Bash’s leading wicket-taker Jhye Richardson and his compatriot Nathan Coulter-Nile. They also have a chance to sign Steve Smith to further strengthen their middle order.

Like every other year, RCB released the most number of players this time. They let 10 players go including Aaron Finch, Umesh Yadav, and Moeen Ali. They surprised everyone releasing Chris Morris sighting his injuries as the main reason. Therefore they will go hard in the bowling department. They have already landed Daniel Sams from Delhi Capitals. WIth Kyle Jamieson available in the market, it will be an easy guess for any fan that they will empty their pockets for the Kiwi international.

Players RCB might go for: Kyle Jamieson, Mohammed Azharuddin, and Mujeeb Ur Rehman

RR handed over the captaincy to Sanju Samson by releasing Steve Smith. They also released Ankit Rajput and Tom Curran. Relying heavily on the Englishmen & the young guns on their side they weakened their bowling options. Therefore, they will try to bring someone to team up with Jofra Archer and Shreyas Gopal. They have a hard battle to fight with RCB & KXIP to land the key bowlers.

Last Season, CSK failed to qualify for the knockouts for the first time since the IPL started. They released 5 players (excluding Shane Watson who retired at the end of the last season) in order to revamp. They signed Robin Uthappa from Rajsthan Royals. They still have 7 players to fill their squad. With a liking to go for old players and mega auctions coming in a year, CSK will be looking to sign spinners with a huge experience. Krishnappa Gowtham and Shivam Dube are the ideal candidates looking for themselves to wear the yellow jersey.

Mumbai Indians already have the best bowling attack in the IPL. After winning back to back IPLs, they just need someone to make in the team in case both Bolt and Bumrah get injured. They are definitely going to use their ‘Right to Match’ card for Nathan Coulter-Nile. Tushar Deshpande can be a surprise addition to the blue army. It will be difficult for MI to buy someone with experience to team up with Rahul Chahar in the spin department. With many options available in the market, they may surprise everyone by going back to Harbhajan Singh.

Last year finalists released two of their key players - Jason Roy and Tushar Deshpande. With only $1.77 million in their pockets, they will be left out with very few options. Their main problem is their opening slot. With Roy gone and Prithwi Shaw struggling, Capitals will need an opening batsman to pair up with Shikhar Dhawan. Alex Hales and James Vince who had an amazing run in the Big Bash will be good additions to the DC squad.

KKR showed faith in their key players and let go of their bench. They saved enough money to buy their own. You might be thinking about who he is. Well, the number one all-rounder does not need any introduction. After finishing his one year ban, Shakib Al Hasan is back in the auction. The love of KKR for Shakib will see him wear his old jersey back.

SRH have kept 22 players. This means they are not looking to buy someone big this auction. The 3 remaining players SRH will go for will be mostly for the players from the Syed Mushtaq Ali Trophy. In such a scenario, a player like Ashutosh Aman can see their names in the ‘Orange Army’.

Players SRH might go for: Ashutosh Aman, and Tom Curran

The IPL auction has shown many unexpected results since its start in 2008. Nobody has rightly guessed what will happen in the auction room. With 1097 players in line to try tier luck, one can expect the unexpected. Players like David Malan, Jhye Richardson, Kyle Jamieson, Glenn Maxwell are the ones who will draw most of the attention. But who knows, Cheteshwar Pujara may end up going back to RCB and Aaron Finch in CSK or KKR to change his jersey for the 9th time.

TheTopBookies recommended bookmaker for IPL 2021 - 10CRIC! An industry-leading cricket betting site with best support & payment methods for India players. New players can get a 100% up to 10,000 INR Bonus on their first deposit.